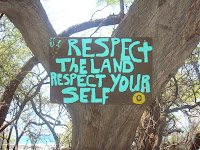 In the words of the Hawaiian locals…”repect the land, respect yourself”….profound really…by taking care fo the land, we are essentially taking care of ourselves and our future. Such a simple signpost says volumes about how we should all live on this earth!

On my recent adventure to Kona for a friend’s wedding, Ro

b, Maaren and I took, what we thought would be a short, easy jaunt to view the Petroglyph ancient carvings in Mauna Lani. Their meaning is uncertain, but these mystical carvings in the volcanic rock were certainly messages from the ancient inhabitants…no one knows their significance, but it is apparent that whatever the meaning, there is power behind them and the backing of the gods…

During our initial venture off to the carvings, I read a sign which mentioned: do not take anything or leave anything behind- these are sacred grounds and please wear appropriate footwear! The .5 mile walk seemed easy for 3 athletic individuals…heed the warnings- we have learned. Within 5 steps, I had stubbed my toe which bled for hours, Rob banged his head on a low lying tree (oozing clear liquid for a day) and Maaren pulled out several thorns out of her foot….I am not sure what we did to the god of the Petroglyph- PELE (pronouced Paylay)- but something was certainly shifted. Upon further investigation and a second “bump” from his United Airlines flight, Rob was informed that we must make amends with Pele or our wounds would continue to suffer….the offering, local Hawaiian Vodka…we aren’t sure if the joke was on us, but, magically, we are no longer suffering!

Regardless of the debacle, the trip was amazing and Kona is fantastic! Pele- thanks for your healing!